Nursing home violence is a growing problem. Studies from New York college professor Karl Pillemer indicate a major issue: conflict and violence are at an alarmingly high rate. The study concluded that 20% of residents had been in a negative or aggressive encounter within just the last 4 weeks.

At Waitz & Downer we understand that nursing home abuse and neglect is all too common of a problem in Louisiana. If you or a loved one are suffering as a result of nursing home neglect, call our expert attorneys today at (985) 876-0870. We will fight for your rights. 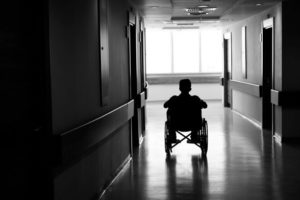 Among the 2,000 residents examined, 6% were involved in physical violence; 16% were involved with verbal disagreements and abuse. It must be noted that this is not a study strictly based on resident-caretaker violence. Rather, this study indicates that resident-on-resident issues are on the rise.

Lack of proper facility staffing seems to be a major cause for the growing trend. Facilities with more residents and fewer staff workers had the biggest issues. Residents with dementia, for example, become irate and combative at times. Without the proper staffing, assistance to calm these residents down and put a halt to behavioral issues is often too slow to stop a violent outburst.

Residents that still maintain their mobility and roommates are often the source of the problem. During the study, it was found that 10% of incidents occurred from residents entering rooms when they were uninvited. Many of these residents went a step further and would rummage through the personal belongings of the room’s occupant.

The study did not go into details involving resident and staff violence.However, the trend of resident-on-resident violence is expected to increase. As the population continues to age, more and more residents are checking into nursing homes to seek proper care.

What can be done to remedy the issue? It’s advised that patient families and patients themselves be vocal about the abuse and violence that’s experienced. As facilities become crowded, many caretakers are either ignoring the issues or have become so used to them that they’re not seen as an issue.

If you have experienced nursing home violence, you have a right to compensation.

Texting and Driving: The Leading Cause of Car Accidents